A Worldwide Approach to Global IDs: Why Setting the Standard is No Easy Feat

Organizations and government entities are struggling on a global scale to determine the best methods for approaching identity management. The conversation around national digital IDs is not new. Governments around the world have expressed both interest and concern, in roughly equal amounts, about adopting these in their countries. However, some citizens of more developed countries such as Australia, Canada, New Zealand, the UK and the US are opposed to the idea of biometric based national ID schemes, mainly on the grounds of privacy.

Setting standards for the global ID verification process is no small task. Beyond the obvious – the need to standardize all identity cards or processes – there is the differences in comfort from country to country with technology advancements like biometrics and other measures.

The UK government introduced the GOV.UK Verify scheme in 2016 as a way for people to prove their identity for online government services, targeting 25 million users by 2020. As at March 2019, it has acquired 3.6 million users. Oliver Dowden MP, the Minister for Implementation, recently announced the creation of a new Digital Identity Unit, which is a collaboration between DCMS and Cabinet Office to ensure the adoption of interoperable standards. The government is also engaging the private sector to establish a commercial framework for businesses to provide digital identity for use with public services. The government hopes to bring this capability online by April 2020.

Singapore has already created a digital ID program with the SingPass Mobile app taking effect in the middle of last year. Malaysia and the Philippines have expressed interest in developing such a program

Africa is taking a less standardized approach to digital identity; each individual county within Africa has rolled out its own approach. For example, Nigeria is moving towards a single, centralized National Citizens Database bringing together various databases for SIM card registrations and driving licenses to be managed by the National Identity Management Commission which issues the National Identity Numbers. And last month (May 2019), Tanzania kicked off biometric verification of mobile telephone numbers. The ID card issued by the country’s National Identification Authority (NIDA) will be the sole document required for the process. Mobile phone subscribers are expected to use the same NIDA offices that capture biometrics for issuing ID cards to verify their fingerprints to register their SIMs.

One of the key issues that Africa is facing in general is a lack of identity management systems or governments not having the ability to identify citizens as there is a large number of the population that is unregistered, or they don’t necessarily have means of biometric verification to prove their identity.

The other issue identified is identity on mobile, because traditionally we have had physical identity documents like passports and ID cards, but the increasing trend is identity moving to mobile phones as there is a very high uptake of mobile usage across the continent, so there is a need to bring the identities of people on mobile phones and make it easier for people to access to government services, as well as authentication remotely.

The U.S. is enacting data privacy laws on a state-level, but lawmakers in the House and Senate are calling for bills aimed at strengthening individuals’ ability to control their data collected by the biggest technology companies, including Alphabet Inc.’s Google, Facebook Inc. and Apple Inc. The California data privacy law, set to take effect in January 2020, is viewed by most as the strictest consumer privacy legislation in the United States. Similar to Europe’s General Data Protection Regulation, which took effect last year, the California measure also includes more provisions allowing consumers to opt out of data sharing as opposed to forcing them to opt in before continuing to use online sites.

Looking Ahead – Why Trust is the Key to ID Verification

The convenience of being able to quickly and easily verify one’s identity comes with the loss of control over where that data is being stored and how it is shared. At Acuant we believe in creating solutions that put the power back into consumers’ hands. Companies are now recognizing that identity data collection and verification is an organization’s biggest vulnerability- and the protection of identity data is paramount. Acuant helps organizations build trust via an identity platform that allows businesses to address security/privacy concerns, regulations and their appropriate level of risk – while at the same time being customer centric. 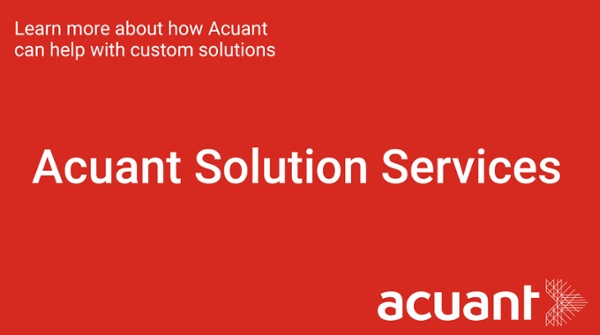 How Alternative Methods Will Pave The Way For a Frictionless Future

Most businesses look to avoid friction at all costs in the user experience - and for good reason. But friction isn’t always bad. It exists for a reason and is only ever introduced when necessary.   Is friction inevitably the future...

Global Challenges with Establishing Identity in Today’s Digital Economy: A Look from a Solutions Provider POV

Acuant CEO Yossi Zekri recently spoke at London’s premiere Identity Week Show. Here is a bit of what Yossi had to say from Acuant’s point of view on the global challenges in establishing identity today. We are all aware that...